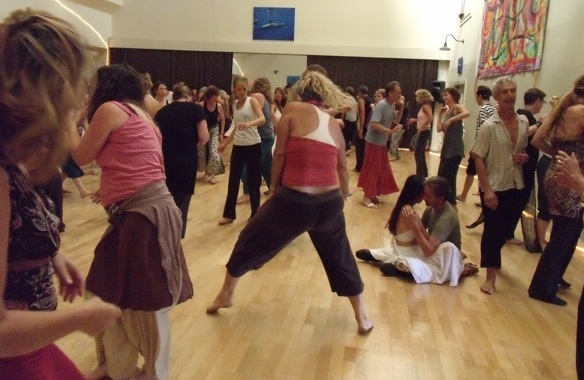 It’s been a while since I said anything positive about a new age activity (to wit there has been positivity about tai chi, healing, singing about angels and, to my eternal shame, thetahealing), but despite my innate fear of new age men, turns out I rather enjoy 5Rhythms movement meditation.

5Rhythms originated in the 1970s and uses tenets of shamanistic, ecstatic, mystical and eastern philosophy – although to the uninitiated it looks like flailing around to music. There are now three different weekly events in Melbourne alone. Today there are around 150 of us, on a fire-hazardly hot day at Abbotsford Convent.

A DJ is spinning languorous ambient music, causing one woman to roll around on the floor, showing her knickers. Others wave their arms around like trees in the wind. We’ll be doing this – to varying BPMs – for the next few hours.

First things first, I get as far away from my cohort Esther as possible (“no touching, please – we’re British,” she mutters) and plonk myself in the corner.

Ten minutes in, I’m still grimacing at ground level. At some point I’ll have to get off the floor, upon which I am trailing the odd limb, and get jiggy with it. The BPMs are rising, and in response, people are running around the room like aeroplanes or bucking their hips wildly, as though reenacting the voodoo sequences in Live and Let Die.

I get up and get stuck in, and after some initial dying inside, I find I’m completely forgetting myself – and pulling awesome shamanistic dance moves, hitherto unseen. Cop THIS, fire twirlers. I sneak a peak at Esther. One minute she’s interpretative prancing through the air with her frock sailing behind her, the next she’s raving to an internal munt0-mix, happy as Larry.

An hour goes by. I love this. I’m secretly dying for someone to gasp of my chops: “You mean to say you’ve had no formal training?” However, I can’t quite lose the “Get fucked, seriously” attitude whenever someone comes whirling dervishing into my space. Especially new age men. They’re creepy, aren’t they? They really are. Just don’t make eye contact – that’s my advice.

One shirtless man with an unruly beard and orange fisherman’s pants curls up in the foetal position on the floor. Another man drifts over to him in a non-threatening manner and slowly reaches out a hand to touch his shoulder. They remain in this chilling tableau for many minutes.

The BPM rises some more. There is clapping. Some people tumble on each other like acrobats. They embrace. Women have, by and large, tucked their dresses into their knickers and are rolling their eyeballs around their sockets. One woman curls into a ball and a man wraps himself around her like a limpet. I try and meet Esther’s eyes so I can mimic a dry heave – I must – but she’s on another fucking plane. Another couple touch each other’s fingers and won’t stop staring into each other’s eyes and kissing. “Feeeeeeeel it” a disembodied voice shrieks over tribal drums. We’re feeling it, we’re feeling it; if only in the form of flashbacks. In fact, as Esther notes later, this seems to be an old ravers’ home, for those who have long since blown a fuse.

As we sit in a massive circle afterwards, in various states of undress, I draw one knee towards me to stop it touching the skin of the new age man next to me*. The facilitator is telling us about a mid-week class called “relating on the dance floor”, in which, reading between the lines, we learn to touch each other and dance at the same time.

“You should do that,” torments Esther in a whisper.

Still, for someone whose contribution at warehouse raves in the 90s was chain-smoking and scribbling down illegible horrible thoughts on cigarette packets, this devil-may-care dancing is a remarkable achievement. I’m going back in; god help me.

* This is fair enough, as a friend told me afterwards a mate of hers goes along to these shindigs purely to pick up new age chicks who are helpless to resist a shirtless man dancing to the divine force.

Jonathan Cainer has my number 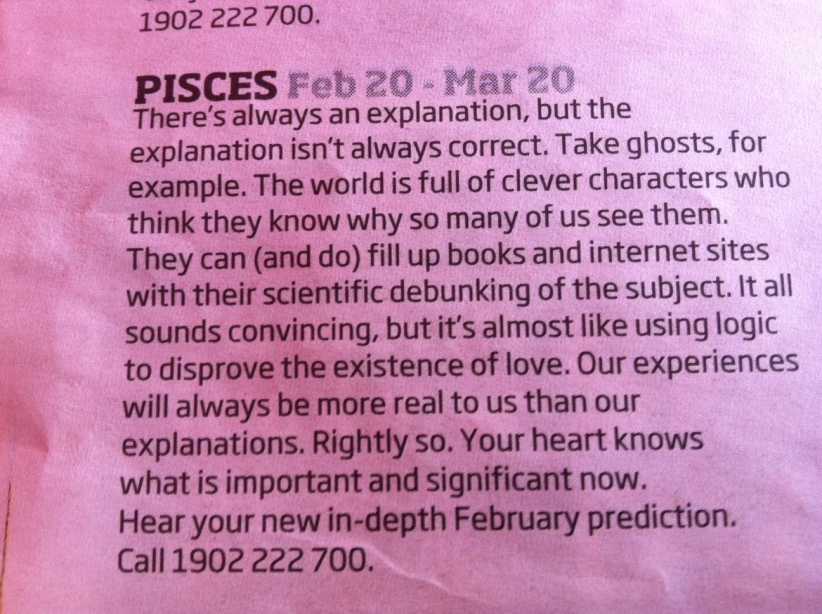