RSS Feed
← Homeopaths threaten journalist with bodily harm (diluted by a squillion)
How to lucid dream – and fast! →

A fake shaman discovers his sham does heal after all 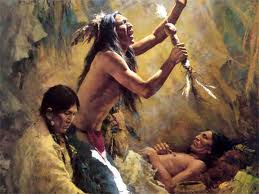 Continuing with the theme that unverifiable new age healing activities may be good for us after all, merely by instilling us with a powerful psychological sense of well-being, here’s an extract from Ben Goldacre’s book Bad Science, in a chapter about the placebo effect.

Around a hundred years ago, there was a native Canadian Indian called Quesalid…

“Quesalid was a skeptic: he thought shamanism was bunk, that it only worked through belief, and he went undercover to investigate this idea. He found a shaman who was willing to take him on, and learned all the tricks of the trade, including the classic performance piece where the healer hides a tuft of down in the corner of his mouth and then, sucking and heaving, right at the peak of his healing ritual, brings it up, covered in blood from where he has discreetly bitten his lip, and solemnly presents it to the onlookers as a pathological specimen, extracted from the body of the afflicted patient.

Quesalid had proof of the fakery, he knew the trick as an insider, and was all set to expose those who carried it out; but as part of his training he had to do a bit of clinical work, and he was summoned by a family ‘who had dreamed of him as their saviour’ to see a patient in distress. He did the trick with the tuft, and was appalled, humbled and amazed to find that his patient got better.

Although he continued to maintain a healthy skepticism about most of his colleagues, Quesalid, to his own surprise perhaps, went on to have a long and productive career as a healer and shaman.”

I’ve got a few shamanic Snake Oil Skeptic activities lined up, and I’m curious as to whether I’ll view them in the same light as new age activities thus far. (That light being dim.) Anthropologists, including Claude Lévi-Strauss, came to view shamans as tribal psychoanalysts, rather than mentally ill savages as had been the common perception.

I’ve ordered this well regarded tome about psychological healing and the role of the shaman (along with holistic therapy and contemporary psychotherapy) – Persuasion & Healing by Jerome D Frank and Julia B Frank – in the hope of learning more about how the unconscious mind responds to ‘healing’ and manifests well-being in the body. Because I like hooking me up some of that.

Posted in Books, Placebo effect, Shamanism. Bookmark the permalink.
← Homeopaths threaten journalist with bodily harm (diluted by a squillion)
How to lucid dream – and fast! →