Vibe me and help me get James Randi’s loot 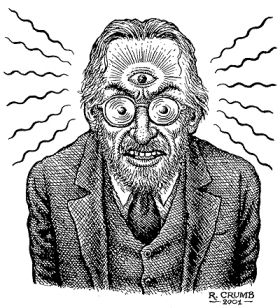 Like the great prophet David Icke says, we all emit vibrations and, similarly, we can tune into the vibrations of everything else – be it the Universe, another person, or that sandwich.

When I told my skepto mate Esther that I reckoned I could identify someone’s mood just by their vibes, she leapt onto it like a bloody terrier on a stick – and now she won’t let go.

“Oh really?” she uttered, in her broad Northern accent, already designed to sound 80 per cent more scathing than the Southern accent. “So you think you could tell someone’s emotion without looking at them? Just by the vibrations in the room?”

“Of course,” I said. “You can feel the energy worrying the air.”

We had a bit of a starey stand-off.

“But surely you tell if someone fancies you by the tension without anything being said?” I persisted, bringing it back to layman’s territory.

“Yes, but that’s my hormones, my blood pressure rising,” she said. “You, on the other hand, think you can identify a complete stranger as being sad, happy or angry without any visual cues.”

“So if I were to present three people with different moods to you, in a small enclosed room with a couple of cameras, while you were blindfolded, you would be able to correctly read their vibes?”

“They’d have to be fixed cameras. If you have camera operators in there you’ll throw me off the scent.”

And thus, what began as a minor knocking of horns over breakfast has turned into a bit of a worry, as Esther plots to utilise the resources of her TV production company to prove my theory to be ailing. She’s even recruiting a skeptics society to set up the ideal scientific scenario.

Anyway, I’ve decided this is doable, but I need to practise. You can’t tell me that, say, dogs can’t pick up on a mood. Look at Lassie. And just as dogs go spastic when a storm’s approaching, so do I. It’s all about electrical frequencies, says Sir Icke.

So next time you’re feeling something real bad, come and find me and focus that feeling at me. If I manage to identify it, I’ll split the James Randi loot with you – he’s the psychic investigator who’s offering a million bucks to anyone who can demonstrate psychic powers under controlled circumstances. Strictly speaking I’m merely tuning into molecular vibrations, but we can probably get away with calling it psychic. Plenty of others do.

Tune in soon for the experiment proper.