RSS Feed
← The Vagus Nerve Vs. Invisible Padlocks
Barometer of Belief as of Oct 2011 → 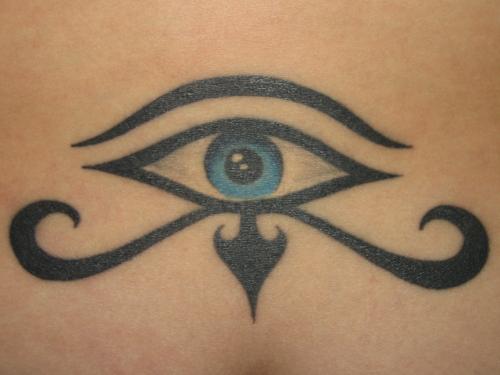 Got a third eye tattoo? Pull up a chair!

Riding on the breeze there came the distant rumble of bongos. But instead of the familiar knot of repulsion in my gut, I found myself imagining the satisfaction the bongo botherers were getting out of interlocking their rhythms and looping into infinity, like psychedelic fractals.

“Thank god,” said a fellow diner when infinity petered out; but at this they started up again, which made me titter and root for the bongo botherers.

I drained the ubiquitous latte and set off to follow the sound.

Richard was not from anywhere in particular, but a citizen of planet earth. To be fair he didn’t utter this himself, but I deduced it from his rough, brown legs, straggly goatee and faraway stare. He perched on a rock, looked out to sea and requested a rolling paper. I shifted over to sit next to him and threw sticks for his sandy dog, which was wearing a bandana. The sun was setting epically over Mount Warning. Richard requested some tobacco. 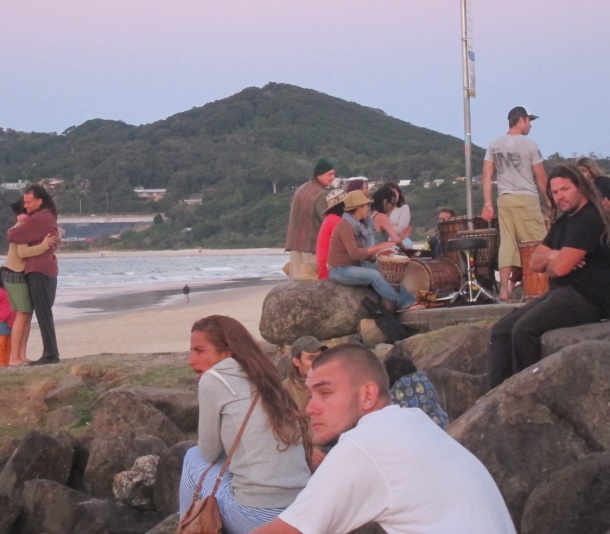 This lovely photo of my new friends provoked vile threats about glassings and chasing people with flamethrowers when I posted it on Facebook.

“Get here earlier tomorrow,” he said. “You need to absorb some vitamin D from the sun and decalcify your pineal gland. That’s your third eye. It calcifies as you get older.” I pictured it scabbed and scaly as a cuttlefish bone behind my chickenpox scar.

Richard gave me a lentil pie he’d salvaged from a dumpster behind the bakery and cracked one open himself.

I thought about what to say other than, “And what do you do?”

“This is all just a figment of our imagination,” he offered before I could come up with anything. He swept his hand out at the shimmering horizon. “What we see here, we have created. Think about taking acid or mushrooms, and how differently you see things then.

“We’re all made up of energy,” he continued. “Like golden light. Sometimes when we meet someone with the wrong energy we’re like lightsabers, you know? Shwwwwung, shwwwwung. But we’re all just drops in the ocean. How do I know? I’ve read enough books and had enough conversations to be sure.”

It helped that Richard was good looking, in the same way that market researchers recruit hot young students to wield clipboards and bounce into your path. Sometimes you’ll weaken and listen. Richard talked some more about the meaning of life, and then drifted off. “Maybe your reason for coming to Byron Bay was for us to have this conversation,” he said in parting.

I wandered off into the sun’s crimson haze, and had a think about my pineal gland. The ancient Egyptians called it the Eye of Horus; the Freemasons depicted the All-Seeing Eye of the Great Architect of the Universe on the dollar bill. It’s known as the Third Eye of clairvoyance, or the Crown Chakra in the Hindu religion and sees metaphysical reality, not physical reality. Metaphysically, your soul leaves your body through it; physically, it secretes melatonin and serotonin, regulating sleep and mood. I want to see if I can get mine picking up stuff my other senses can’t.

How to stimulate your pineal gland without drugs, according to the internet

Conclusion: You know, I think I did go to Byron Bay to meet Richard, as sitting and talking to anyone on a pile of rocks while the sun goes down is quite out of character.

Further reading: This is the most concise, well-balanced article I found on the third eye: http://www.magickriver.net/3rdeye.htm.

Posted in Chakras, Conversations. Bookmark the permalink.
← The Vagus Nerve Vs. Invisible Padlocks
Barometer of Belief as of Oct 2011 →